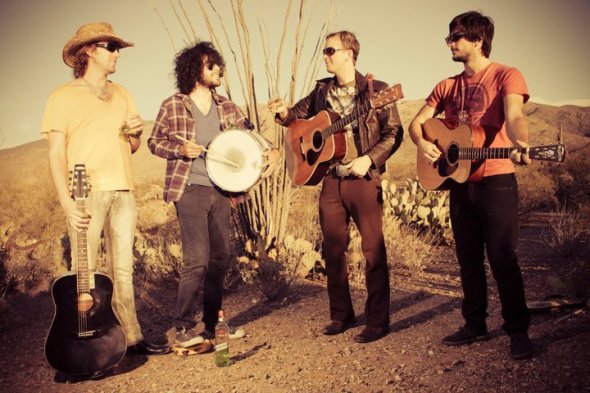 Native June came to my attention at a showcase for Planet LA Records nearly two months ago, where they were the first of two outfits backed by the label and the opener for the night’s festivities. Unfortunately, the sound in the room wasn’t so great that night (perhaps the fault of whoever was in charge of mixing them at that venue), so I couldn’t completely make out leading man Gabe’s sorta punky, purring vocals but I and everyone around me enjoyed their stage presence and energy.

They have a much lighter, more upbeat and fun sound than the followup act, Djinn (who are very dark and melancholic and basically the night to Native June‘s day; hell, even the lighting the former used for their set was the complete opposite of the latter’s – accented with deep purples, bloody crimson, eerie green and a stark blue all loaned a foreboding atmosphere, especially when the smoke machine started spewing out a ghostly fog at the Djinn guys’ feet). NJ‘s music would be well-suited to a nice long coastal drive on a sunny day. Perhaps that’s why they named their latest effort, a 9-track EP, Ocean to Sunset.

Native June have a strong stage presence. The turnout for this particular location was unfortunately lacking, but the people were watching were definitely catching on to their infectious charm, and these boys would play with the same energy level and enthusiasm for a three head crowd as they would for a sold-out arena. From the get-go it’s obvious that they’re passionate about what they do, and the very experience of playing is what they’re there for. That’s what I like to see in the Rock bands I review for ALTERNAZINE and in the Metal bands I review for HAILSWEBZINE; I mean, if the band isn’t feeling it, it’s painfully clear!

The Briton of the bunch, Tristan, is arguably the most spirited member onstage. Constantly in motion and with red curls and self a-bouncing, the bassist flits from one side of the stage to the other with an ear to ear grin and likes to interact with all the heads in the crowd between songs. and afterwards supported their labelmates Djinn by moving along and getting the rest of the heads around the stage bopping as well.

All of them are extremely friendly and glad to chat with showgoers after their set (which they did; each one of them made the rounds before Djinn took to the stage to introduce themselves and give thanks to all the standing attendees). No rock star ‘tude here!

Native June bring their own brand of cutesy quirk with them wherever they go, too: Gabe and Tristan tend to dress alike and tell the crowd they’re proud brothers (they’re not, I later found out when I spoke with them after their set). I wish I’d asked where that particular inside joke started.

As it turns out, none of the guys even share a common origin; I already mentioned that Tristan hails from the U.K., but guitarist Martial Chaput is a fairly recent French transplant, and Gabe is an Indiana native. While they all call L.A. home nowadays, drummer Jake DeSouza is the only lifelong Californian among them.

Ocean to Sunset isn’t their first album; they released Whiskey & Walnuts back in 2006, a single titled “Daisy” last year, and shot a neat music video to partner it not long after. As it turns out, “Daisy” wound up on the Ocean to Sunset EP. They inked their deal with Planet LA Records this year and plowed on ahead getting their new baby show-ready in time for the Fall.

All songs on this album are upbeat and hyper-peppy (I made that word up just for you, guys!), so this is no heartstring-tugging tearjearker. From the first song, “Saturday Night”, the listener is immediately told that this is a feelgood album meant as a deliberate distraction to the uncertainty and apparent darkness all around us (for those of us who continue to torture ourselves with today’s headlines, anyways). The opening track is a hormonally charged party anthem and an ode to having a good time (“from the waist down”, no less), livin’ it up and basically, to not giving a shit.

“Daisy” is a message to a little girl about growing up and moving forward (with some oft-forgotten bits of advice such as “you’ve got one life to live”, ” it’s important to make the most of each day”, and “if it’s meant to happen, it will”), a point which is reinforced with some captured moments of the titular starlet as a playful youngster and later, as a very sexy, very grown up take on Red Riding Hood (basically she looks like a hotter version of the one played by Amanda Seyfried in that awful movie). I didn’t care for the opening of “Daisy” too much, though. The synthesized part sounds a little cheesy.

“I Shoulda Saw it Coming” is my favorite lyrically – especially the line (ha!) about astronauts on drugs. Even though it’s sort of a cautionary tale about doing what you’re told not to, it’s rife with tongue-in-cheek humor presented amongst catchy staccato rhymes and it instantly sticks to your ears like peanut butter does to the roof of your mouth. Sorry for that visual, but when you hear this track you’ll know what I mean. It’s nowhere near as unsavory as the peanut butter experience. Unless you’re a salty old fuddy duddy who hates fun. God, Dad, see?! This is why we can’t have nice things!

The Pop-infused, Indie/Grit Rock quartet cite everything from Kings of Leon, The Juliana Theory, The Killers, Bloc Party, to Sublime and Weezer as influences.

Artwork and tracklisting for Ocean to Sunset are as follows: 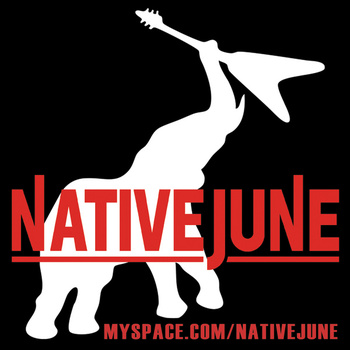 Ocean to Sunset was recorded and produced by at Barn Productions in Los Angeles,

The album will be formally released on September 23rd, and there’s going to be a launch party at the infamous Viper Room that night. Click here for more details on this event. I’ll be there myself!

In the meantime, you can hear some of their songs on their ReverbNation.

Make sure to be their fan on Facebook for more news and updates!

This entry was posted on August 29, 2011 by lejasivharju. It was filed under Uncategorized .